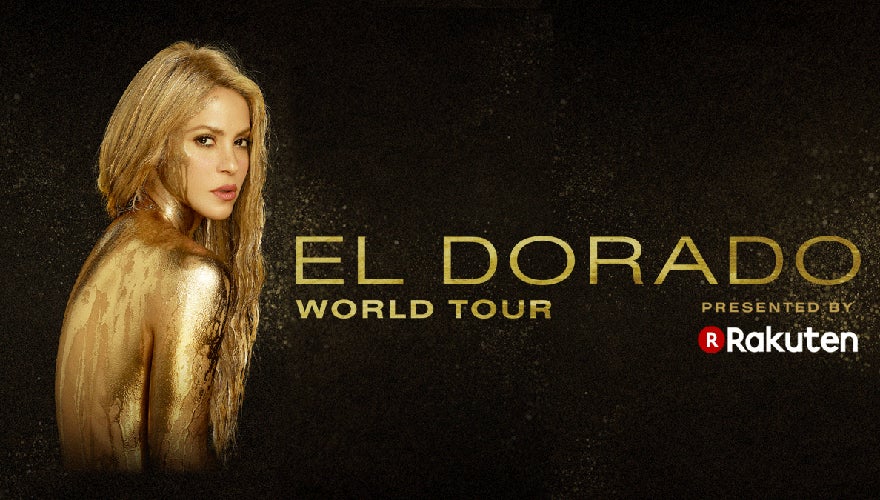 Rescheduled from January 20, 2017. Origional tickets will be honoured.

Shakira’s doctors have determined that she needs to spend the next few months working towards recovery in order for her vocal cords to be in optimal condition for touring, and as such we are obliged to postpone the U.S. leg of the “El Dorado World Tour,” previously scheduled for January 2018.

Twelve-time GRAMMY® Award-winner and international superstar Shakira has announced plans to embark on her EL DORADO WORLD TOUR, presented by Rakuten. The tour, produced by Live Nation, will feature many of her catalog hits and kicks off on November 8.

“Thank you all so much for listening to my music in so many places around the world. I can’t wait to be onstage again singing along with all of you, all of your favorites and mine. It's going to be fun! The road to El Dorado starts now!” Shakira said.

The tour announcement comes on the heels of Shakira’s 11th studio album release, EL DORADO, which hit #1 on iTunes in 37 countries and held 5 of the top 10 spots on the iTunes Latino Chart within hours of its release. The 5x platinum album, including her already massive global hits - “La Bicicleta,” “Chantaje,” “Me Enamoré,” and “Déjà vu”- currently holds the top spot on Billboard’s Top Latin Albums, marking her 6th #1 album on this chart. Her single, “Chantaje” featuring Maluma, is 16x diamond certified, while its video currently has been viewed over 1.4 billion times, making it the #5 fastest video to reach 1 billion views worldwide and working its way to soon be the most viewed video of her entire catalogue.

Each fan aged 12 and older must present proof of full COVID-19 vaccination* along with government issued ID at entry gates to Scotiabank Arena.

We are unable to accept proof of a negative COVID-19 test for admittance (except for guests with a verified medical exemption). Children who are 11 years of age and younger will be exempted from proof of vaccine and testing requirements.

A negative COVID-19 test result will no longer be accepted, except for individuals with a doctor's note indicating they cannot receive the vaccine due to medical exemptions.